Milène Guermont has multiple strings on her bow. As an artist engineer, she uses materials that are considered banal and knows how to breathe into them a poetic dimension. She does not settle for making concrete speak, she also seizes the most hackneyed images to transform them and give them fresh life.
The bay of Mont Saint-Michel, with its continuous procession of visitors, is doubtless one of the best-known landscapes in the world, one of the most photographed and most longed for: "Eternal gazes flowing, at the pace of the waves…” (dixit Apollinaire in Alcools). Among the countless clichés inspired by this site, the movement of the tides, which, at a given moment, cover the limitless foreshore to give birth to one of the stereotypes of tourist literature: the sea would rise “at the speed of a galloping horse”.
Replicated from guide to guide, this expression, whose origin is uncertain, is now applied to the phenomenon of the "breaker," the name given to the wave forming in the sea that “swims up” the rivers by rolling in over the fresh water. With the greatest tides, this “bar” (“barre” in French) of water invades the course of the River Couesnon in a hypothetical "gallop."
Seizing this stereotypical expression, Milène Guermont seeks to embody it. In her series of videos titled “BARRE”, she does not aim at emotionally reiterating a metaphor that has become worn and threadbare. With her, the wave is not only associated with the image of the horse, it becomes the horse. The artist, indeed, attempts to show the invisible.
Working only with the framing, the focusing and the rhythmic soundtrack of the animal’s breathing and stride, she sparks the metamorphosis of a commonplace scene. She reveals the animal as being present in the landscape. Filmed by her, it becomes alive from the inside, in line with organic pulsations. The surface of the wave becomes a skin, and the foam of the sea the sweat that settles over it. Little by little, the being appears. The process cannot be objectified. Indeed, Milène Guermont gives us not the means to see the animal as much as the means to see the world through it. From now on, we are this horse galloping on the beach and neighing in the sea breeze.

The story of BARRE is ephemeral, highlighting the foam appearing in the bay of the Mont-Saint-Michel, in the rhythm of the "tide rising at the speed of a galloping horse".

This experimental video symbolizes the horse without literally representing it.

A moment shows the arrival of the breaker in the flashing light of a stroboscope, which has the pulse of a horse's gallop. Thus, the sound of the sea is gradually transformed into the gallop of the horse, while the tide quickly rises.

Neither special effects nor other image manipulations were used in the production in order to heighten the presence of nature.

Clicking on this pic, new ones will appear.

Selection of movies from BARRE

BARRE J
BARRE I
BARRE A

The breaker in the city

GALLOPING FOAM is an aquatic and light sculpture evoking the foam created by the sea and the famous metaphor of the “tide rising at the speed of a galloping horse” by Victor Hugo.

For the NUIT BLANCHE 2014, GALLOPING FOAM is a basin (40 feet long) of undulating water covered by foam and light flashes from a stroboscope, in front of the Town Hall of the 15th arr. of Paris. Movements of water, creation of foam and light are synchronised with the sound of the background. It operates on loops of 5 minutes: either galloping or snorting/neighing/breathing horse’s sounds to evoke a bigger intimacy with it. Foam is also the nickname given to the horse‘s sweat.

Futhermore, at the extreme part where the artwork touches the floor, the natural noise of the surf mixes with sounds emitted by the loudspeakers. GALLOPING FOAM focuses on the effects created by interactions of water/foam/light, symbolizes the horse without representing it in a literal sense, and “takes” townsfolk to the sea.

Concept
Work in process
The artwork during Nuit Blanche 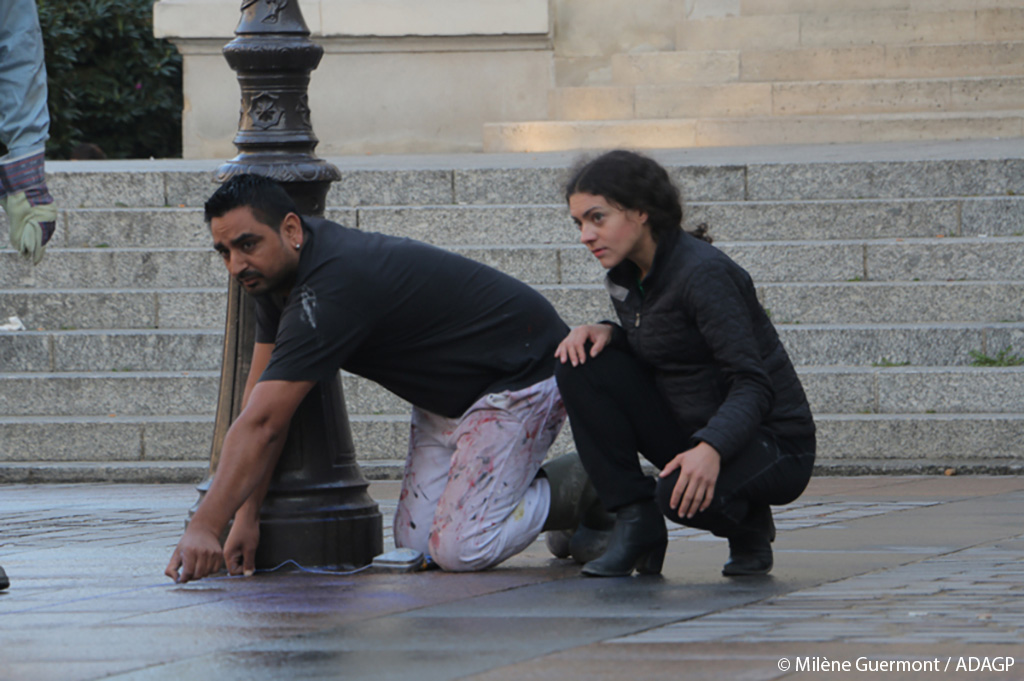 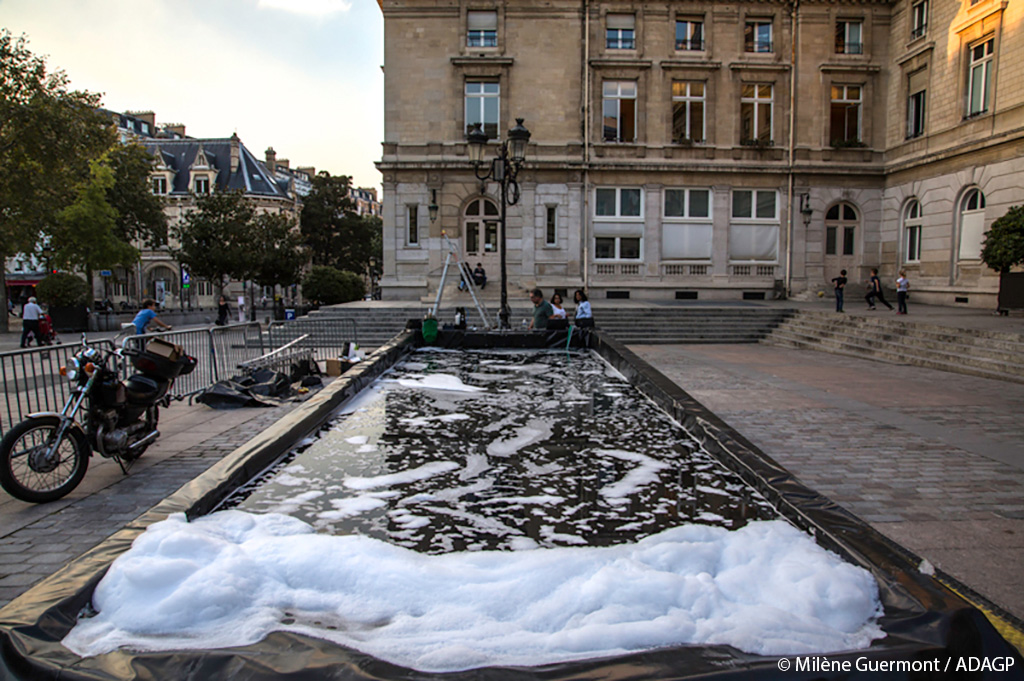 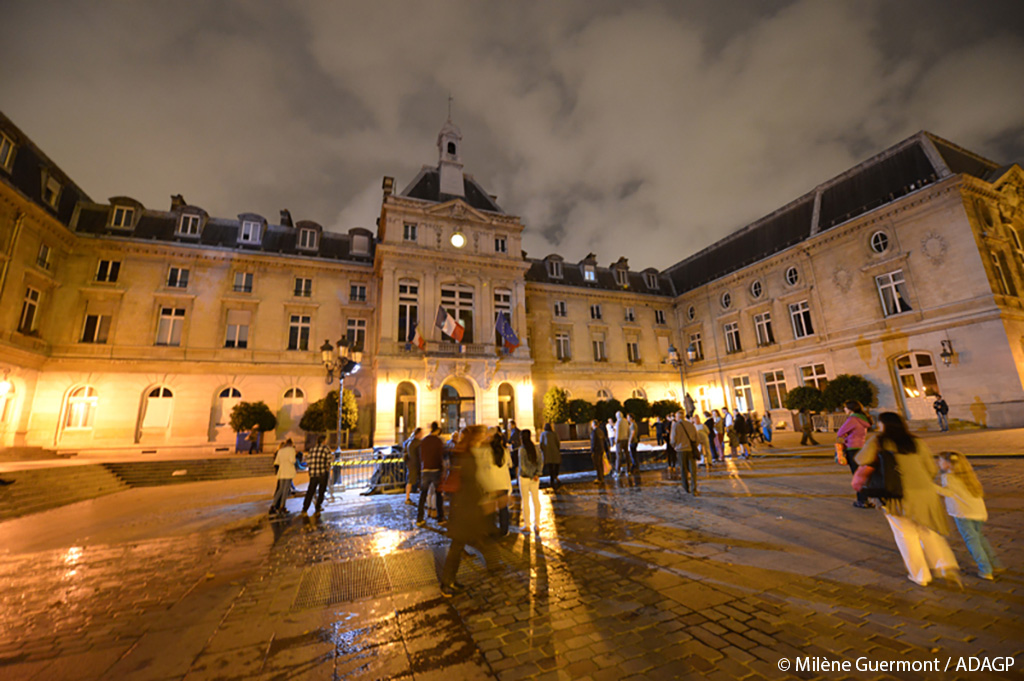 Clicking on the pics above, new ones will appear.